Natural forces, over millennia, have moved and shifted California’s landscape into majestic mountains and scenic valley; yet, they are also the source of serious seismic activity, hazards and risks.

Over the last 162 years of recorded earthquake history, California has experienced eight high-intensity quakes ranging from 7.1 to 7.9 magnitude on the Richter scale, according to the U.S. Geological Survey (USGS).

Building along a fault line in California means selecting the right products, like DuraFuse Frames.

In the more recent past (1992), a series of earthquakes (all greater than 6.5 magnitude) struck northern California over an 18-hour period. Following these events in 1994, the Northridge earthquake rocked the densely populated San Fernando Valley in Los Angeles County with a magnitude 6.7. From 2008 to 2017, scientists counted 1.8 million earthquakes (most of them too small to feel) in the state of California, according to a report in Science. And each year, roughly 10,000 earthquakes and aftershocks shake the southern California population alone, with the most recent events occurring back-to-back on July 4 (6.4 magnitude) and July 5 (7.1 magnitude) near the city of Ridgecrest.

“the single most urbanized earthquake fault in the United States.”

A 2015 study titled “Uniform California Earthquake Rupture Forecast (Version 3)” released by the Working Group on California Earthquake Probabilities gives the highest likelihood of producing magnitude 6.7 or higher to the Hayward Fault. With experience comes wisdom, and since this highly populated region hasn’t recently experienced a large event, developers, builders and master planners look across the globe to see the consequences of sacrificing structural elements to these serious forces of nature.

People currently living along the faults throughout California or other high-seismic areas of the world get excited about and truly appreciate innovation and improvements in structural stability, repairability, resiliency and simplicity. While building projects continue to pop up all over California, there are higher concentrations along the fault areas where the bulk of the population lives.

Now, a new seismic resiliency company has been born: DuraFuse Frames. The innovative moment frame system allows for large-span layouts (popular among architects), fast construction (popular among owners and developers) and braced-free steel frames (popular among occupants); prevents beam and column damage during severe quakes (popular among everyone who wants to survive); and features repairability via replacement of a single component: the bottom fuse plate (popular among sustainability planners). Research and development, beginning in 2014 and culminating with full-scale earthquake simulation and vibration testing at University of California San Diego, confirms that this patented technology creates structures with higher resiliency and repairability. Resilient buildings mean resilient businesses, communities and peace of mind.

DuraFuse Frames have a shear-yielding fuse-plate connection system that is simple to incorporate, fast to install and commercially competitive. With code approvals obtained in March 2019 and building projects underway, high earthquake hazard no longer needs to equal high risk of building loss. 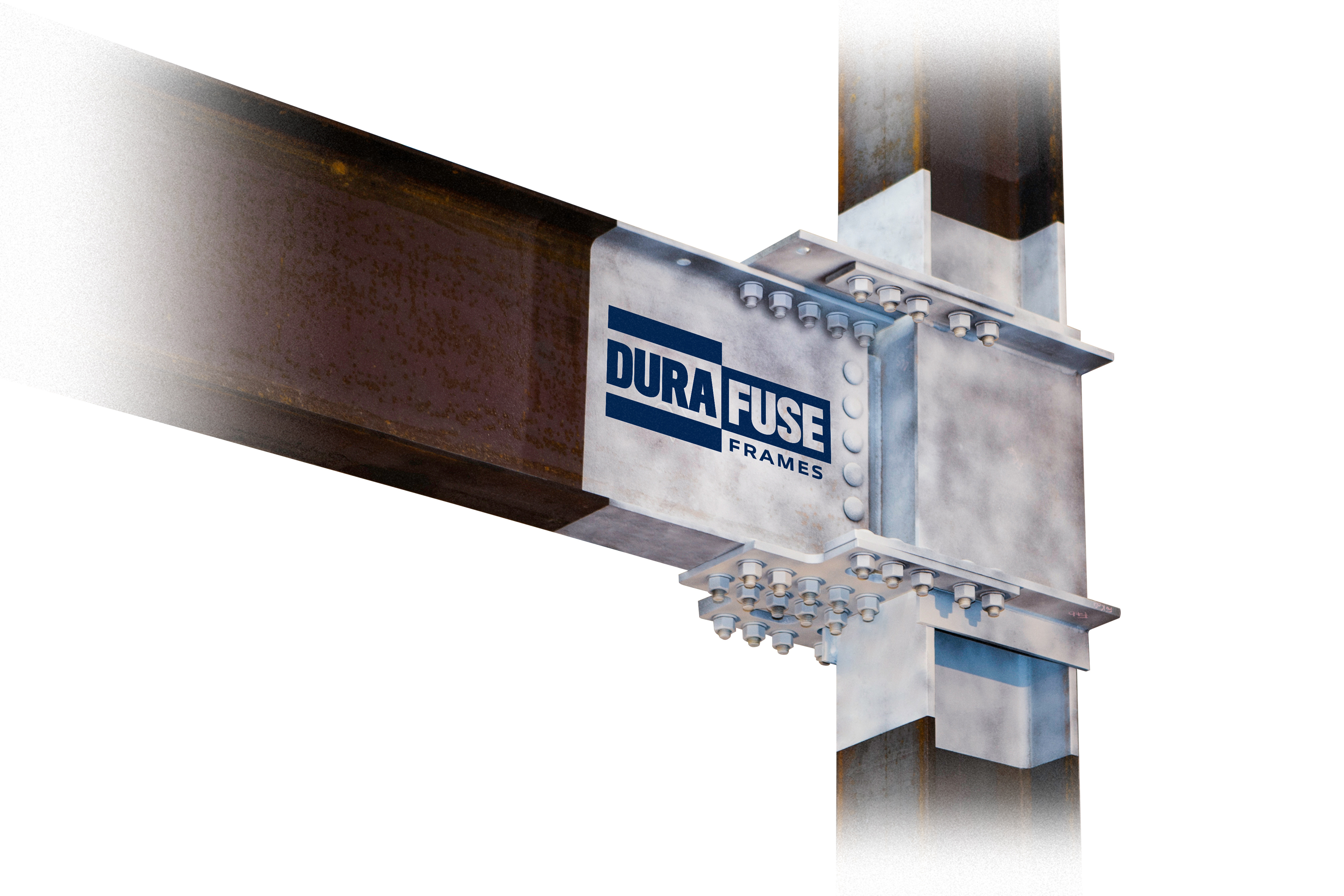